Three hours until everything changes.

It took two years to get to this point.

When the start gun goes, the relaxed mood of attention and preparation will be replaced with focused race mode. We're in good shape. Jon is in the best physical and flying form of his life. The atmosphere in the support van is good. Richard and I are working well together.

The weather forecast is OK for the Gaisberg area: some E'ly wind and cloudbase around 2000m, but the airmass is quite humid, and there's a chance of thunderstorms during the afternoon, especially in the high mountains and Dachstein area. With a mixed forecast, airspace to negotiate, several tens of kilometers to cover on foot, and a 3000m mountain to climb all in the first 24 hours of the race, it is sure that this year's X-Alps will be technical and challenging right from the start.

Saturday before the race at 4pm - last bit of kit has just arrived (in the nick of time!) - a carbon footplate for my super lightweight pod harness from Ozone (the 'Ozium' harness).  Another 200grams saved!

Now everything is set - just the start tomorrow and then the fun begins...

Posted by Jon Chambers at 4:54 PM No comments:

Final preparations in Fuschl am See

The full team is now assembled at Race HQ in Fuschl am See, a few kilometers from Salzburg. In these few final days before the race we're making the final adjustments to the race equipment, being briefed by Red Bull on all aspects of the race, and preparing the media aspects. Here's a quick summary of what we've been doing.

Today went according to plan.

We turned up at the race office first thing and sneaked through the registration and equipment collection before anyone else made it there.  We then got through the technical checks on the glider and the rest of the equipment with ease (everything being in order).

The gear provided this time is excellent - great clothing from Reebok, a black edition GoPro as well as an Ambit watch from Suunto.  We also get some equipment just for the race - a Flymaster Live (for the live tracking) and Pieps Globalfinder device amongst other stuff.

We'd only just had time to look through all of this before we dashed up the Gaisberg to go for a fly.  My plan was to fly down to the Dachstein and back.  About half of the X-Alps field were there on take off and, spread over about an hour we all left heading south east.  Conditions were good, but even so the transition across the Abtenau valley to the Dachstein required some focus.  Once established on the Dachstein the conditions were excellent, with strong climbs and amazing views.  I didn't hang around though, the sky looked like it was going to overdevelop so I sped back to Fuschl as fast as my little LM5 would carry me.  Despite the headwind I made excellent time and was landing back in Fuschl after only 3hrs 30mins in the air - not bad for just under 100km!  The picture below is approaching the Dachstein turnpoint at 3000m! 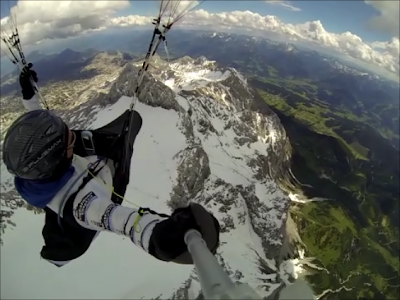 After several days of stowing stuff in our Duracell provided campervan, finally on Saturday we were ready for the off.  With a better forecast in the western alps than in Austria we headed for Fiesch.

Sunday morning, however, dawned damp with low cloud, well below Fiesch take off. So instead we headed up and over the Furka pass.  Up in the high mountains cloud base was higher and with almost nil wind on the pass I took off on the east side.  Although it was early conditions were surprisingly good and a short but very technical flight got me to just a couple of kilometres short of the top of the Oberalp pass. A quick lunch and I tried the same trick heading towards Chur but with a low base and strong valley wind I was soon defeated, so we gave up and headed for the Dachstein in Austria. 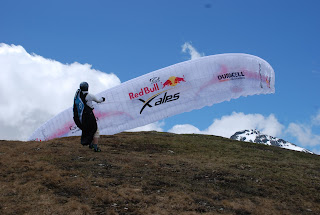 Our plan was to check out the paths up the south side of the Dachstein on Monday morning, fearing that the via Ferrata's could still be blocked by snow.  In fact, it was worse than we expected, even the access to the via ferrata's was deep in snow and avalanches and rock falls were regularly tumbling down the slopes as the sun warmed the snow.  Walkers coming through the col at Tor told of thigh deep snow even there.  This will be an interesting discussion in the route and safety briefing as I cannot see all this snow going in a few days time! 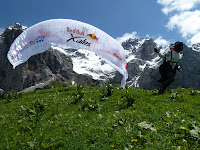 Thwarted in our efforts to ascend the Dachstein on foot, but having achieved what we came to do, I launched below the Sudwandhutte.  From there I climbed straight out in a powerful 3m/s climb.  The day was good with cloud base at 2500m (later it went up to 3000m) so I decided to head west along the route.  The only problem was a strong headwind (10-15km/h at base), but I made it to Mittersill, just short of the Wildkogel turnpoint before turning and flying most of the way back with the wind pushing me along!


Now we are in the race HQ at Fuschl, ready to start some of the admin work tomorrow morning when the race office opens.

Bouncing up and down in excitement

The start of the X-Alps gets ever closer.

With less than two weeks to go to the start, my training plan starts to ease off dramatically in something that athletes know as 'the glorious taper'.  As I start to train less I started to think about all the people who have helped me with the physical side of my preparation.

Firstly, I have Fred Gazeau to thank once again for putting together a great training plan for me and to Laurent at New Concept Sports for sponsoring me again and providing plenty of advice.  In addition Nicolas Dominik, my physio has kept my body working properly even when I've tried my very hardest to damage it!

However, I wanted to mention someone else who has given up plenty of his time and facilities, not to mention his huge expertise, on working on my strength and co-ordination.  Fellow local pilot Pierre-Eric Thierry has spent one evening a week over many weeks building my core strength and co-ordination through circuit training and trampolining. Jumping up and down on a trampoline might not sound like the most logical activity for X-Alps training, but actually it complements the rest of my training and hopefully my improved core strength will help avoid injuries during the race.

So I wanted to say a huge thank you to everyone who has helped me to get to this point and particularly to Pierre-Eric for the gruelling Wednesday night sessions! 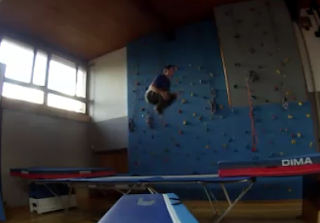 Posted by Jon Chambers at 9:28 PM No comments:

Sounds like an X-Alps flying forecast!  So I went out flying again under the new wing, what else can you do when you have a new toy that is itching to be flown??

Needless to say conditions were not to most peoples taste, in fact virtually no one else was out on the Saleve, our local hill near Geneva. After walking up the north end I took off at the telecabine and then flew south, but big black ominous clouds just above the top made me cautious and I stayed well out from the hill working the clouds rather than the ridge.  Still, I managed to get about a kilometre past the tower at the very south end before coming back north under a rather big ugly black cloud.  I could see sun the other side so I pushed the speed bar and made it through.  It still managed to rain on me a little though!  With the cloud suck now contributing to the wind which was off to the north, I could not make headway against the wind back to Veyrier so landed at Coin before hiking up and walking across to the 'table d'orientation' launch.  Once again I had the take off to myself, so took off and, just for completeness, flew north this time right up to the very north tip of the 'petit saleve'.

What a lovely and surprising evening of flying.  The air time is quickly adding up under my new wing and I am feeling more confident on it now, even at full speed!

Sorry no pictures today - forgot to take the Go Pro!


Posted by Jon Chambers at 9:55 PM No comments: 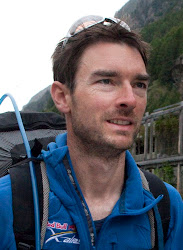